An Introductory Course in Functional Analysis 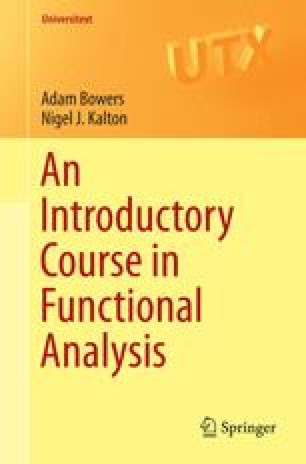 An Introductory Course in Functional Analysis pp 61-82 | Cite as

The space \(C[0,1]\) of continuous functions on the interval [0,1] can be equipped with many metrics. Two important examples are the metrics arising from the norms

where \(f\in C[0,1]\). The metric arising from the first norm is complete, whereas the metric induced by the second norm is not (i.e., there exist Cauchy sequences that fail to converge). Completeness of a metric is a very profitable property, as we shall see in this chapter. The first theorem we shall meet is a classical result about metric spaces called the Baire Category Theorem. It originated in Baire’s 1899 doctoral thesis, although metric spaces were not formally defined until later.

Baire Category Theorem Profitable Properties Continuous Linear Bijection Uniform Boundedness Principle Open Mapping Theorem
These keywords were added by machine and not by the authors. This process is experimental and the keywords may be updated as the learning algorithm improves.
This is a preview of subscription content, log in to check access.

Exercise 4.2 Show that the space \(C[0,1]\) of continuous functions on the closed interval [0,1] is not complete in the norm

Exercise 4.5 Show that if Y is a normed space which is homeomorphic to a complete metric space, then Y is a Banach space. (Hint: Consider Y as a dense subspace in its completion.)

Exercise 4.6 Let X and Y be Banach spaces and let \(T:X\rightarrow Y\) be a bounded linear operator. If M is a closed subspace of X, show that either T(M) is first category in Y or \(T(M)=Y\).

Exercise 4.10 Show that there exists a function \(f\in L_1(\mathbb{T})\) whose Fourier series fails to converge to f in the L 1-norm. Precisely, show that if

Exercise 4.12 Let X and Y be Banach spaces. If \(T:X\rightarrow Y\) is a bijection, show that the adjoint map \(T^\ast:Y^\ast\rightarrow X^\ast\) is also a bijection. Conclude that if T is an isomorphism of Banach spaces, then so is \(T^\ast\).

Exercise 4.13 Show that the Hilbert transform of Example 4.40 is well-defined.

Exercise 4.17 Let X be an infinite-dimensional Banach space and suppose V is a closed subspace of X. If both V and \(X/V\) are separable, then show X is separable.

Exercise 4.20 Find an example of a map \(T:X\rightarrow Y\), where X and Y are normed spaces, such that T is a bounded linear bijection, but T -1 is not bounded. (Hint: X and Y cannot both be Banach spaces, or T -1 will be bounded by Corollary 4.30.)