The Ethics of Cultural Heritage 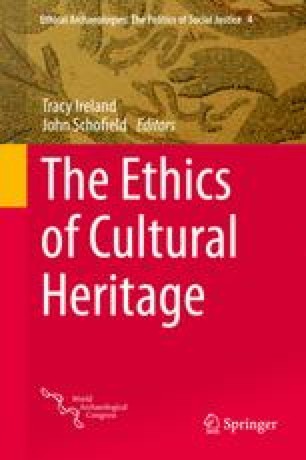 Tourism, World Heritage and Local Communities: An Ethical Framework in Practice at Angkor

Ethical decision-making processes seek to facilitate informed, reflective and deliberative choice of best action and outcomes which take account of decision maker and stakeholder values and principles whilst responding to contextual circumstance. However, in practice, conflicting perceptions or ranking of values as well as external pressures can obscure a clear view of ‘what to do?’ Nowhere is this challenge more apparent than at World Heritage sites with both mass tourism and living resident local communities.

At the World Heritage site of Angkor, Cambodia, the combination of rapidly growing tourism and the intangible heritage of a massive lived-in sacred landscape provides an opportunity to explore the interaction between human rights, intellectual cultural property and heritage management and the role that an ethical decision-making framework can play in navigating that interaction.

This chapter initially explores similarities and differences between the theoretical models and concepts used by applied ethicists and the actual practice of decision making in heritage management. An ethical decision-making framework is outlined and parallels highlighted with aspects of international declarations on human rights and rights of indigenous peoples as well as with cultural heritage management decision making and practice.

Consideration of values, stakeholder relationships, overarching principles and pressures (ingredients of the ethical framework) underpin both ethical decision making and good heritage practice. However, challenging issues arise where values are contested or not well articulated and where external pressures place values under threat.

At Angkor, traditional cultural practice is an aspect of heritage value that was not recognised in the initial World Heritage List citation in 1992 but is now understood to be fundamental to both the value of the place itself and to Khmer people for whom Angkor is both ‘home’ and a symbol of nation. However, this ‘culture’ also has important ‘economic’ value to the ever-growing tourism sector. There is currently a significant disconnect between the beneficiaries of the economic value and traditional owners of the cultural value.

The chapter considers a local community-based tourism project at Angkor, which is being undertaken within the parameters of the ‘Angkor Heritage Management Framework’ project: a joint initiative of UNESCO, the Royal Government of Cambodia and the Australian Government. The project demonstrates how application of an ethical framework for cultural heritage has fostered a tourism product which not only balances but also innovatively exploits synergies between the conservation of heritage values, the needs of the local community and the interests of the tourism industry.

Cultural Heritage World Heritage Ethical Framework Multidimensional Poverty World Heritage Site
These keywords were added by machine and not by the authors. This process is experimental and the keywords may be updated as the learning algorithm improves.
This is a preview of subscription content, log in to check access.

This paper presents a framework that is derived from the work and experience of the St James Ethics Centre, an Australian centre for applied ethics, working with public, private and not for profit organisations and professional associations. The case study draws heavily upon the Angkor Heritage Management Framework project being undertaken by Godden Mackay Logan Pty Ltd for UNESCO, the Royal Government of Cambodia and the Australian Government, whose support is gratefully acknowledged. We also particularly thank Dr Georgina Lloyd, Nicholas Hall and Prof Sharon Sullivan for their generous assistance and our Khmer colleagues for the privilege of working on and at Angkor and amid their culture and their traditions.