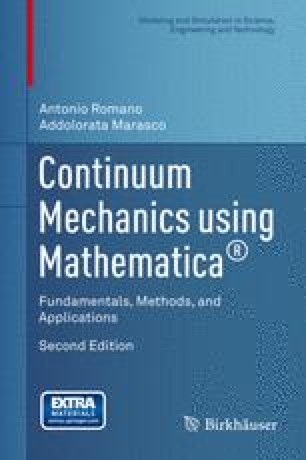 Chapter
Part of the Modeling and Simulation in Science, Engineering and Technology book series (MSSET)

Determining the constitutive equations of materials is one of the most important and difficult problems of continuum mechanics. Since in this theory we renounce to a microscopic description of matter, we can determine constitutive equations only by experiments. These experiments can be widely simplified if the form of constitutive equations is reduced by theoretic considerations. In Chap.  6 we have shown as the constitutive axioms perform this task. Also the symmetries, considered in this chapter, have the same aim. A symmetry is an operation carried out on a body which has no effect on the response of material to external actions. It is proved that these operations form a group which characterizes the material. In this chapter we analyze the unimodular symmetries that characterizes the thermoviscoelstic fluids, the orthogonal group which defines isotropic solids and the symmetry group of the crystal classes, studying their effects on the form of the constitutive equations of these materials. After a section of exercises, the last sections describe the program LinElasticityTensor, written with MathematicaⓇ, which allows to determine the elasticity tensor of linear elasticity of different materials.

Constitutive Equation Symmetry Group Elasticity Tensor Reference Configuration Strain Energy Function
These keywords were added by machine and not by the authors. This process is experimental and the keywords may be updated as the learning algorithm improves.
This is a preview of subscription content, log in to check access.