The Generation of High Magnetic Fields 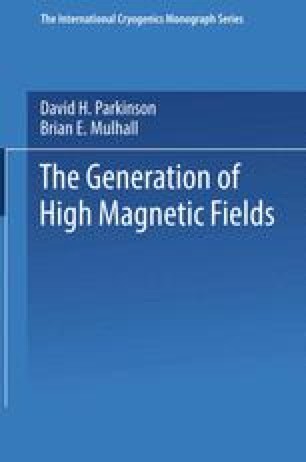 The Generation of High Magnetic Fields pp 77-103 | Cite as

When superconductivity was first discovered, there was an immediate interest in the possibility of generating powerful magnetic fields using superconducting solenoids and thus in so doing without power dissipation. This idea was quickly shelved when it was discovered that fields less than about 1000 Oe were sufficient to destroy superconductivity in the then known superconductors. The first materials studied were naturally the pure elements such as tin and lead. Table 6.1 shows the currently known superconducting elements with their transition temperatures and their critical magnetic fields extrapolated to 0°K. The idea was again expressed when de Haas and Voogd (1929, 1931) showed that alloys of lead and bismuth remained superconducting in fields near 20 kOe. However, at such fields it was thought that the current-carrying capacity of the material was too low to be useful. It was not until Yntema (1955) and Autler (1960) used niobium coils on iron formers that it was shown that usefully high-current densities in the presence of magnetic fields could be achieved. Then followed very rapid developments with the discovery that the compound niobium-tin, Nb3Sn, could carry very high “supercurrent” densities (~ 105 A/cm2) in fields near 90 kOe and that alloys such as those of the niobium-zirconium system also had extremely useful behavior (Kunzler, 1961).

Lorentz Force Critical Current Density Critical Field Flux Line Meissner Effect
These keywords were added by machine and not by the authors. This process is experimental and the keywords may be updated as the learning algorithm improves.
This is a preview of subscription content, log in to check access.