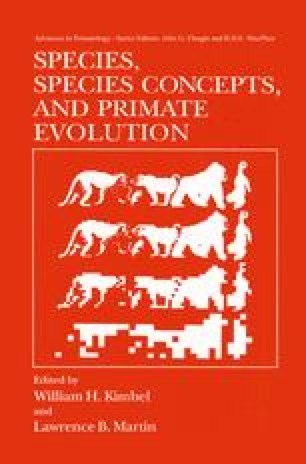 The Tested, the Untestable, and the Redundant
Chapter
Part of the Advances in Primatology book series (AIPR)

The Random House College Dictionary of 1968 gives as the first of several listed definitions of the word theory: “a coherent group of general propositions used as principles of explanation for a class of phenomena.” It is in this sense that I will use the concept of theory in this chapter. I would like to add that all sorts of connections between carefully tested concepts, which serve as units of thought and which have objectively established perceptual bases in reality, are usually built into a framework that is often called a theory. These theories, and others within them, are all ultimately tested against sundry aspects of objective reality. The methodology itself employed in taxonomic practice, which is an invented human activity and not a reality of nature, should be based on, follow, or fall out of the tested (not merely testable) theories of evolutionary biology.

Evolutionary Theory Species Concept Species Problem Biological Species Concept Recognition Concept
These keywords were added by machine and not by the authors. This process is experimental and the keywords may be updated as the learning algorithm improves.

Concepts of method designate systematic courses of action devised by men for the purpose of achieving certain goals... [these]... represent part of man’s conceptual equipment. Epistemology is a science devoted to the discovery of the proper methods of acquiring and validating knowledge.

If a taxon is defined (as a morphospecies) in such a way that it coincides with the phenon, the taxonomist may facilitate the task of sorting specimens, but this activity will result in “species” that are biologically, and hence scientifically, meaningless. The objective of a scientifically sound concept of the species category is to facilitate the assembling of phena into biologically meaningful taxa on the species level.

In the time dimension, therefore, species can only be defined arbitrarily or with reference to compartment limits set by contemporary organisms, or organisms from some other, arbitrarily selected transect of time-character space.