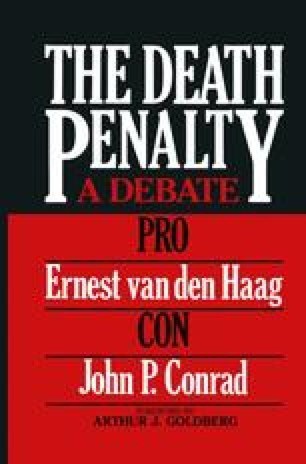 Whatever the outcome of this debate in the minds of our readers, it is clear to me—and, of course, to my stern opponent as well—that at this stage of our history, capital punishment is a winning cause in America, if nowhere else in the civilized world. Abolitionists may win some of their cases in the courts, in spite of the retentionists’ furious denial that the courts should have jurisdiction over the nature and quality of the punishment that the state may impose on criminals. It is still possible for abolitionists to attain high office from the electorate and subsequently to “sabotage” the executioner’s craft by commuting the sentences of condemned murderers. Nevertheless, I must gloomily concede that the public opinion polls, in which the hangman now receives a handsome plurality of the respondents’ votes, are corroborated in statewide referendums. If the general public has its way, Dr. van den Haag’s cause is won, and without the benefit of his robust arguments.

Criminal Justice Capital Punishment Criminal Justice System Public Opinion Poll Life Imprisonment
These keywords were added by machine and not by the authors. This process is experimental and the keywords may be updated as the learning algorithm improves.
This is a preview of subscription content, log in to check access.