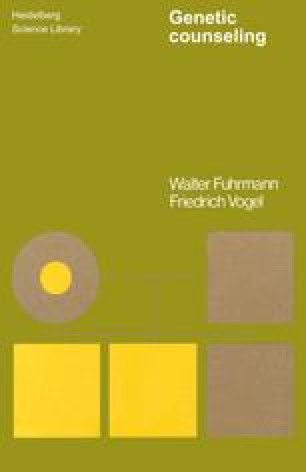 The Genetic Prognosis for a Consanguinous Marriage

Since ancient times, ecclesiastic and secular authorities have prohibited consanguinous marriages. This stand is very unlikely to have had a biological reason. As far as we can tell, it was based on social necessity, for the formation of a society and a civilization is inconceivable without an incest taboo. Historical reasons would probably account for the extension of the incest taboo to other degrees of kinship. Various societies made exceptions; some even tolerated the incestuous marriage between brother and sister as for instance in ancient Egypt where this privilege was reserved for the pharaohs. Christian civilization, however, frowns on consanguinous marriages. A marriage between first cousins is regarded as undesirable and the Roman Catholic Church still requires that the couple obtain a special dispensation (usually granted nowadays). But the ecclesiastic laws are also based on other than biological considerations. This becomes obvious when one realizes that the church also forbids marriages between “spiritual” relatives—i. e. god-father and god-child.

Common Gene Common Ancestry Inbreeding Coefficient Consanguinous Marriage Autosomal Recessive Disease
These keywords were added by machine and not by the authors. This process is experimental and the keywords may be updated as the learning algorithm improves.
This is a preview of subscription content, log in to check access.