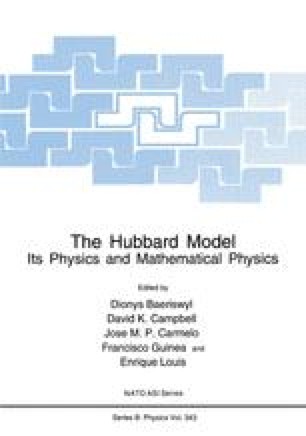 In this work, we continue the study of the Hubbard model with infinite U that has been reported previously [1, 2]. Ground state quantum numbers, momentum distribution, magnetic structure factor, overlap of the exact wavefunction with the Gutzwiller wavefunction and, several electronic correlations have been obtained for a 4 × 4 cluster of the square lattice. In particular, the possible existence of a phase transition from a perturbative region where the overlap between the non-interacting Fermi sea and the correlated wavefunction is large to a non perturbative region where this overlap is negligible, has been carefully examined. Although non conclusive due to the size limitations, we have shown that the momentum distribution for a small density of holes closely resembles that of spinless fermions.

Momentum Distribution Hubbard Model Total Spin Double Occupancy Spinless Fermion
These keywords were added by machine and not by the authors. This process is experimental and the keywords may be updated as the learning algorithm improves.
This is a preview of subscription content, log in to check access.