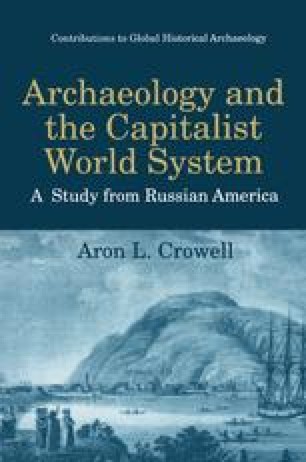 Archaeology and the Capitalist World System pp 75-101 | Cite as

Archaeological studies at the Three Saints Harbor Krepost site (KOD-083) were undertaken to complement and balance the historical record reviewed in the preceding chapter. Russian adaptation and maintenance on the American frontier, conquest and social accommodation with respect to its indigenous peoples, and the gradual formation of a stratified, colonial society were complex processes that could not be fully understood or recorded by contemporary observers. Neither, in the flow of events, was much recorded about the revealing details of daily life–what this new world looked like, and how its inhabitants lived and interacted with each other. Further limitations of the historical record derive from the fact that few in Russian America were literate, and that these few tended to be among the upper ranks of colonial society. Their writings provide only rough statistics and incidental information about most segments of the colonial population, although the exotic ways of the indigenous “savages” received more attention than the lives of the lowly and familiar promyshlenniki.

Magnetic Anomaly Magnetic Survey Colonial Society Cultural Deposit Iron Nail
These keywords were added by machine and not by the authors. This process is experimental and the keywords may be updated as the learning algorithm improves.
This is a preview of subscription content, log in to check access.