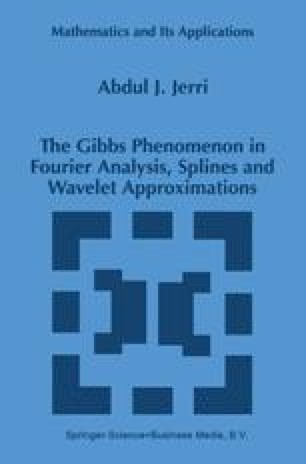 The Gibbs Phenomenon in Fourier Analysis, Splines and Wavelet Approximations pp 1-36 | Cite as

We should mention at the outset that the well-known Gibbs phenomenon was first discovered analytically by Henry Wilbraham [1] in 1848. This was a half century before the famous mathematical physicist Josiah W. Gibbs [2,3] explained its presence in the output of the supposedly extremely accurate harmonic analyzer of Albert A. Michelson and S.W. Stratton in 1898 [4] (see also Michelson [5], [6]). As we elaborate on the historical development in Section 2.7, it seems that the results of Wilbraham were almost forgotten for about eighty years until Carslaw [7] brought it to some light in his short historical note in 1925 (see also Carslaw [8], [9]). This raises the legitimate question of whether the phenomenon should be re-named as “Gibbs-Wilbraham Phenomenon?”. Such a question of credit and priority may be still a subject of discussion among the concerned researchers. In the meantime, and for using the name familiar to most, we shall use “The Gibbs Phenomenon”; besides telling the story that recognizes Wilbraham’s effort, which is long overdue. Fortunately, this story is well told by E. Hewitt and R. Hewitt [10] in 1980.

Fourier Series Jump Discontinuity Convolution Product Convolution Theorem Gibbs Phenomenon
These keywords were added by machine and not by the authors. This process is experimental and the keywords may be updated as the learning algorithm improves.
This is a preview of subscription content, log in to check access.