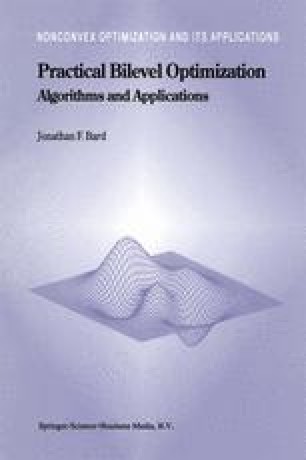 Chapter
Part of the Nonconvex Optimization and Its Applications book series (NOIA, volume 30)

One of the first applications of bilevel programming dealt with the Mexican government’s efforts to establish agricultural development policies [C1]. As leader, the government’s objective was to maximize the sum of consumer and producer surplus. This was done by simulating the behavior of an atomistic market with profit—maximizing producers. Two sets of variables were defined. The first, called impact variables, included employment, farm income, the level of maize production, the level of wheat production, and the size of the government budget. Maize and wheat were singled out because of their role as basic food grains. The second set comprised the control variables and included fertilizer subsidies, subsidies on the interest rate charged against irrigation investment loans, purchases of maize and wheat at varying support prices levels, and water tax possibilities.

Sugar Beet Bilevel Programming Objective Term Biofuel Crop Farm Gate
These keywords were added by machine and not by the authors. This process is experimental and the keywords may be updated as the learning algorithm improves.
This is a preview of subscription content, log in to check access.