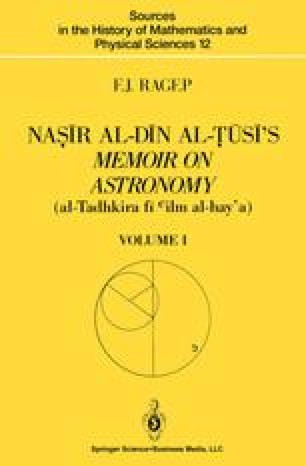 Chapter
Part of the Sources in the History of Mathematics and Physical Sciences book series (SOURCES, volume 12)

Abū Jacfar Muḥammad b. Muḥammad b. al-Ḥasan Naṣīr al-Dīn al-Ṭūsī was born on Saturday (at dawn according to Riḍawī1), 11 Jumādā I, 597 H./17 February 1201 A.D. in Ṭūs or its environs2 and died in Baghdad (at sunset according to Baḥrānī3), 18 Dhū al-Ḥijja 672 H./25 June 1274 A.D. In a remarkable century that began with the death of Chu Hsi and further witnessed the birth, death or both of such luminaries as Roger Bacon, Ibn cArabī, Maimonides, Gregory Chioniades, Ibn Taymiyya, Thomas Aquinas and Levi ben Gerson, Ṭūsī’s breadth and depth of learning stand out. Even in his lifetime he was something of a legend and acquired the honorific title of khwāja (distinguished scholar and teacher);4 later he came to be referred to by the rather more impressive ustādh al-bashar (teacher of mankind) and al-mu c allim al-thālith (the third teacher, i.e. after Aristotle and Fārābī).5 After his death, Ṭūsī’s influence, which can only be described as monumental, continued in fields as diverse as ethics, natural philosophy, mathematics, Sufism, astronomy, kalām (dialectical theology), fiqh (law), and logic.

Religious Belief Religious School Maternal Uncle Ancient Science Honorific Title
These keywords were added by machine and not by the authors. This process is experimental and the keywords may be updated as the learning algorithm improves.
This is a preview of subscription content, log in to check access.