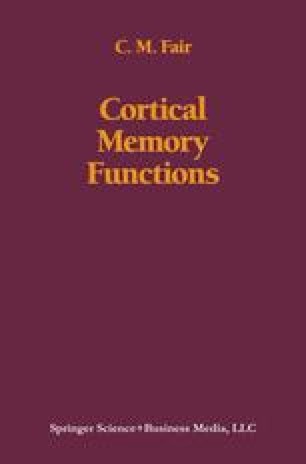 The Hippocampal System and LTM

The previous sections concern a generic memory system that takes shape “forward”—that is, by successive relay from prime receiving to parasensory and association areas. This Section concerns the long-term memory system that mediates specific recognition and depends upon pathways that reciprocally connect association cortex with the hippocampus. To the extent that their formation depends upon return fiber systems or playback from the hippocampus, long-term memories are laid down “backward.” Consolidation is thus a recursive process, and in the absence of the hippocampus does not occur.

The structure of such memories is counterintuitive in three respects: (1) they consist of elements already existing in the generic memory system, most of which are subject to further probabilistic change; (2) only part of a given long-term memory is subject to fixation; and (3) the parts fixated consist of elements represented at the “far” end of the generic memory system—elements that, being maximally generalized, are in themselves least liable to change over time. The psychological consequences of this arrangement are explored in later sections.

Glucocorticoid Receptor Dentate Gyrus Corticotropin Release Factor Prime Receive Association Cortex
These keywords were added by machine and not by the authors. This process is experimental and the keywords may be updated as the learning algorithm improves.
This is a preview of subscription content, log in to check access.