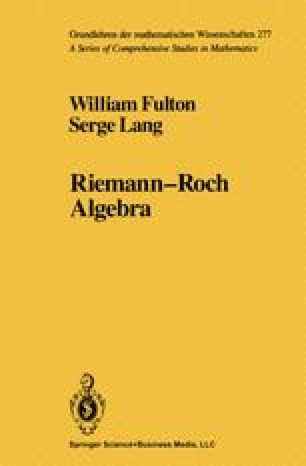 An Intersection Formula. Variations and Generalizations

The first point of this chapter is to develop a commutative diagram similar to that of the Riemann-Roch theorems, and called the Intersection Formula for the K-functor. In particular, this will show how the product in the ring K(X) relates to the geometric intersection of subschemes of X. From this intersection formula for K we deduce a corresponding formula for Gr K, which is analogous to the “excess intersection formula” of [FM], cf. [F 2], Theorem 6.3. Special cases of the intersection formula are contained in [SGA 6] and [Man], but the general version given here for K-theory seems to be new. Our proof eliminates the use of Tor, and gives another striking illustration of the deformation formalism of Chapter II.

Exact Sequence Intersection Formula Coherent Sheave Coherent Sheaf Grothendieck Group
These keywords were added by machine and not by the authors. This process is experimental and the keywords may be updated as the learning algorithm improves.
This is a preview of subscription content, log in to check access.