Comparison of Type I and Type II Diabetes 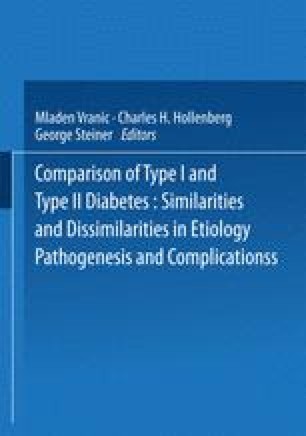 For the past ten to fifteen years diabetologists have emphasized the numerous differences separating that type of diabetes mainly affecting children, associated with an autoimmune destruction of the beta cells (Type I or IDDM, Insulin-Dependent Diabetes Mellitus) and that type affecting primarily individuals in later life and closely associated with aging, overnutrition and diminished exercise (Type II or NIDDM, Non-Insulin-Dependent Diabetes Mellitus). As a result of this trend in differentiating these two broad categories, the National Diabetes Data Group published in 1979 an official classification which was subsequently accepted by the World Health Organization and which demarcates the two disease entities from each other (see chapter by Bennett). It is now interesting that this apparently clear differentiation is becoming less precise as more data accumulate. In fact, the ecumenical exuberance of the late 1970s to segregate all diabetics into either Type I or Type II was perhaps a little too unsophisticated in that some individuals, such as those with maturity-onset diabetes occurring in youth, or those in whom a kind of insulin-dependent type diabetes develops late in life after many years of what is clearly Type II diabetes obviously can’t be classified in either of the two broad categories. The nomenclature itself is even confusing since it is now obvious that there is a prodromal phase to Type I diabetes when the patient is not dependent on insulin and, likewise, many in the remission or “honeymoon” phase can go off insulin for variable periods of time. Thus these subjects are strictly not “insulin-dependent”.

Beta Cell Identical Twin Islet Cell Antibody Beta Cell Destruction Autoimmune Destruction
These keywords were added by machine and not by the authors. This process is experimental and the keywords may be updated as the learning algorithm improves.
This is a preview of subscription content, log in to check access.