The Physics of Tire Traction 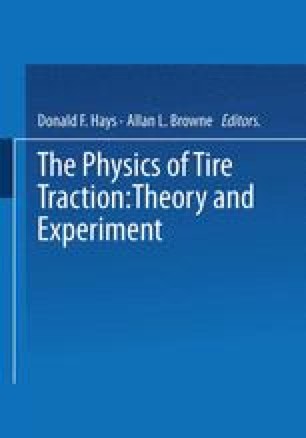 Elementary Effects in the Contact Area of Sliding Rubber

Visual observation of the contact area of sliding rubber reveals that the motion between the frictional members is often not sliding in the accepted sense. Often motion is by “waves of detachment” passing along the contact in the same direction as the relative displacement of the rubber. These waves are folds in the rubber surface that are almost certainly produced by buckling. Adhesion appears to be complete between the waves. Buckling is attributed to compressive tangential stresses in the contact area which are theoretically predicted and qualitatively confirmed by experiment. The motive force driving the waves is a tangential stress gradient. The mechanism of wave initiation for hard sliders on rubber tracks is different from that for rubber sliders on hard tracks. The measured frictional force reflects predominantly the energy dissipation accompanying the propagation of the waves.

Contact Area Wave Velocity Natural Rubber Tangential Stress Frictional Force
These keywords were added by machine and not by the authors. This process is experimental and the keywords may be updated as the learning algorithm improves.
This is a preview of subscription content, log in to check access.