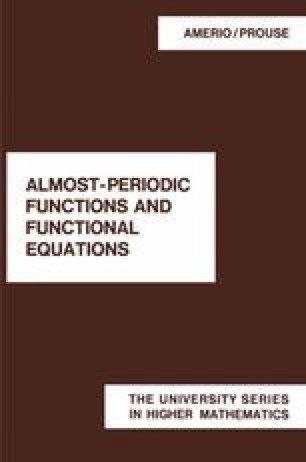 The harmonic analysis of a.p. functions extends to such functions the theory of Fourier expansions of periodic functions. In the numerical case, this analysis has been made by Bohr, Weyl, De la Vallée Poussin, Bochner, who at first defined the Fourier series associated to a given a.p. function f (t) : it can then be proved (approximation theorem) that the series thus obtained is summable (by some appropriate method) to the value f (t); this theory has as its starting point the mean value theorem. Bogoliubov has used the opposite procedure, proving at first, directly, the approximation theorem and subsequently deducing the mean value theorem and the Fourier expansion.