The Evolution of Mammalian Characters 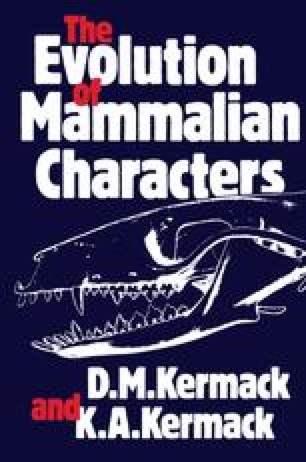 The Evolution of Mammalian Characters pp 100-105 | Cite as

The existence of mammals in the Middle Jurassic has been known since the eighteenth century when they were first discovered in the Stonesfield Slate of Oxfordshire. The first specimen was thought not to be mammalian, and the first recognition that mammals already existed in the Mesozoic Era did not happen until a century later. A young man, William John Broderip, studying Law at Oxford, was interested in Natural History and attended lectures by William Buckland, later elected to the first professorial Chair of Geology at Oxford in 1819. In 1812 or 1814, the date is uncertain, Broderip came to Buckland with two tiny lower jaws which he had obtained from an old quarryman, who was collecting for him at Stonesfield, a few miles north of Oxford. The Stonesfield Slate is a limestone which, on exposure to the weather and particularly to frost, splits easily into thin lamellae. It was used, and a similar stone is still used, in the district as roofing slates giving the houses and farms their attractive and regionally characteristic appearance. The Slate was quarried, or with more accuracy mined, at Stonesfield, the blocks being stacked for weathering to take place and then finally split by hand into roofing slates. Wages were low and the quarrymen knew that some of the gentlemen of Oxford would pay good money for interesting fossils. This is how Broderip obtained his two jaws and also how most of the Stones-field mammals were collected.*

Lower Jurassic Middle Jurassic Mammalian Evolution Molar Tooth Mammalian Fossil
These keywords were added by machine and not by the authors. This process is experimental and the keywords may be updated as the learning algorithm improves.
This is a preview of subscription content, log in to check access.