Genesis of the Hymenoptera and the phases of their evolution 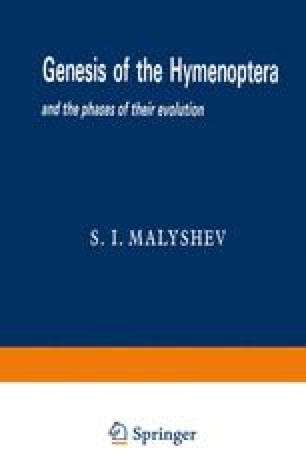 Genesis of the Hymenoptera

We are not certain of the identity of the ancestors of the order known as the Hymenoptera because of the lack of relevant palaeontological data. Their earliest fossil representatives lived in the very remote past, in the lower Lias, that is to say at the beginning of the Jurassic period or even earlier. It is interesting to note that these early forms did not belong to any one systematic unit, but to a number of already well-differentiated groups. Examples of these are the members of the genera Liadoxyela, Paroryssusy, Megaulacinus, and Mesohelorus discovered by A. V. Martynov (1937) in the Jurassic deposits of Turkestan. Remains of the sawfly Archexyela crosbyi were later found in the Triassic deposits of Queensland (Riek, 1955). These discoveries, of course, give no direct palaeontological evidence that the primary forms of the Hymenoptera existed at much earlier times than these.

Malpighian Tubule Jurassic Deposit Wing Venation Remote Past Fossil Insect
These keywords were added by machine and not by the authors. This process is experimental and the keywords may be updated as the learning algorithm improves.
This is a preview of subscription content, log in to check access.