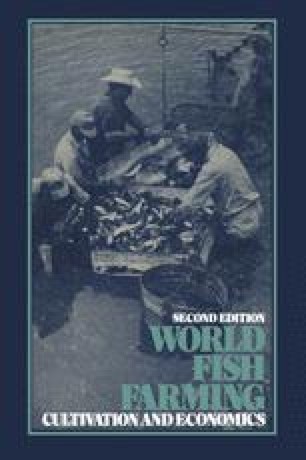 Aquaculture in Canada began in the Province of Quebec where the Atlantic salmon (Salmo salar) and the speckled trout (Saluelinus fontinalis) were propagated commercially by 1857. With establishment of the Newcastle Hatchery in Ontario by the Canadian government in 1866, a system of salmonoid production was established which strongly influenced both private and government aquacultural developments in Canada, if not North America, over the century which followed. Similarly, the construction of a series of major jar hatcheries along the Great Lakes, beginning in 1875, heralded the advent of a culture method which was generally adopted in North America for the culture of coregonid, percoid, and, more recently, esocid and other fish. The pond culture of centrachid fish, begun by government agencies in 1900 for the production of black bass (Micropterus) for live release, is presently limited to modest government and private operations, largely in the Great Lakes region. While fisheries research and the management of fisheries resources has been a priority consideration in Canada for many years, a concerted effort toward the application of fisheries science to the commercial production of food fish and marine invertebrate organisms in confinement is of comparatively recent origin.

Rainbow Trout Atlantic Salmon Fishery Research Brook Trout Environment Canada
These keywords were added by machine and not by the authors. This process is experimental and the keywords may be updated as the learning algorithm improves.
This is a preview of subscription content, log in to check access.