The Art and Science of Inventing 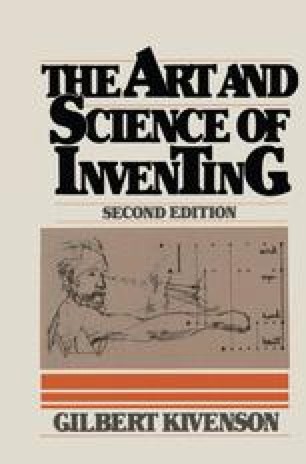 The steps involved in making the transition between a workable invention and an active business have been previously outlined. To further illustrate the general method, a few examples will be presented that describe how different inventors under differing circumstances converted their ideas into profitable enterprises. The inventions chosen represent four widely separated areas of interest: an industrial product, an instructional method, a recreational device, and a medical aid. The companies vary from home-operated, part-time businesses, to small corporations. The rate of growth and final form of each enterprise depended on the business skills of the inventor and his associates, the nature of the invention, the condition of the economy into which the business was launched, and the luck of the entrepreneur in finding a suitable market before his funds were exhausted. An all-important factor in these cases appeared to be the personal goal of the inventor. If he wanted a small, easily managed organization, his company tended to remain that way. If he desired pronounced growth, was able to delegate responsibility, and was willing to work sufficiently long hours, his company grew proportionately.

Fusion System Beer Brewer Traction Device Metal Holder Profitable Enterprise
These keywords were added by machine and not by the authors. This process is experimental and the keywords may be updated as the learning algorithm improves.
This is a preview of subscription content, log in to check access.

Cite this chapter as:
Kivenson G. (1982) Invention into Enterprise-Some Case Histories. In: The Art and Science of Inventing. Springer, Boston, MA