Mechanisms of Work Production and Work Absorption in Muscle 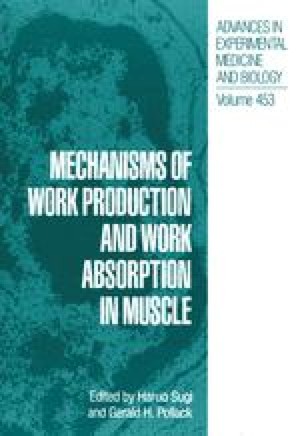 On the Working Stroke Elicited by Steps in Length and Temperature

Muscle contraction is generally thought to involve tilting of the light chain region of the myosin head. This could account for 5-10 nm of axial displacement as it moves from nearly perpendicular to the filament axis (the state at the beginning of the working stroke) to the rigor conformation (at the end of the working stroke). According to the kinetic model of Huxley and Simmons1, the extent that a cross-bridge progresses through the working stroke depends on the mechanical conditions. A large tilting occurs only when the fibre is allowed to shorten. Evidence for such tilting was provided by the changes in intensity of the third myosin meridional reflection (M3) following a step release2. However, there is little change in the M3 intensity when a force increase is elicited by a 10°C temperature jump3, and these results were interpreted to indicate that tilting is not the structural transition responsible for force generation. Here we present a simulation of the changes in the intensity of the M3 reflection elicited by step changes in either length or temperature, based on the atomic model of the actin-myosin head complex. The results show that the same set of assumptions for the motions associated with the working stroke can predict the response to both kinds of perturbation. The main difference is due to the larger extent of the working stroke elicited by the length step.

The elementary process which drives force generation and filament sliding in muscle is thought to originate from a structural change, the working stroke, in the myosin head attached to actin1,4. The recent resolution of the atomic structure of the acto-myosin complex5,6 allowed this model to be refined: a substantial tilting of the light chain binding region of the myosin head can account for 5–10 nm of axial displacement as it moves from nearly perpendicular to the filament axis (the state at the beginning of the working stroke) to the rigor conformation (the state at the end of the working stroke). How far a cross-bridge progresses through the working stroke depends on the load imposed on it1. During the rise of tension in an isometric contraction or the tension redevelopment following a length step, the extent of the working stroke depends on the position of the cross-bridge along the overlap region7,8. In this case the cross-bridges generate force against the total sarcomere compliance, the sum of the filament compliance and the cross-bridge compliance. At the plateau of an isometric tetanus the steady force T 0 is maintained by asynchronous cross-bridge interactions without change in filament strain, and a freshly attached cross-bridge generates force against only its own compliance.

Recent structural9,10 and mechanical11 evidence suggests that the cross-bridge compliance is ∼2 nm per T 0, much smaller than previously assumed1. This implies some revision of kinetic models for force generation that are based on the Huxley-Simmons paradigm12. In general, the smaller the cross-bridge compliance the higher the barrier of mechanical energy which prevents the cross-bridge from proceeding through the working stroke in isometric conditions, and the larger the structural difference between the state responsible for the isometric force and the state responsible for maintaining force during filament sliding.

Thus the observation that there is little movement of the myosin heads at the isometric plateau13 is not necessarily in contradiction with the tilting head model. On the contrary, this model is strongly supported by measurements on single muscle fibres of the changes in the intensity of the third order myosin meridional reflection (M3, at spacing 1/14.5 nm−1, sensitive to axial movement of the myosin heads) in response to rapid length steps. The intensity of the M3 reflection changed with the same time course as the mechanical manifestation of the working stroke, the quick tension recovery elicited by the length step2,14,15. These results suggested that the heads are oriented near the perpendicular to the filament axis at the isometric plateau, in contrast with the more parallel conformation in rigor. Depending on the extent of the working stroke elicited by the step, the heads may pass through the perpendicular and eventually assume a more parallel orientation. When the temperature of an active isometric fibre from frog muscle is suddenly increased from 6°C to 16°C, causing a 1.7-fold rise in isometric tension, there is no substantial change in the intensity of M3 reflection3. This result was interpreted by the authors as evidence that tilting is not the structural basis of force generation, but rather “merely a consequence of the change in force induced by the length perturbation”. However we show below that the lack of change in the M3 intensity in the experiment of Bershitsky et al.3 can be quantitatively explained by the tilting head model. Changes in the intensity of the M3 reflection were calculated on the basis of a model for the structural changes elicited in the myosin heads by step changes in length or in temperature. The results show that the same set of assumptions for the motions associated with the working stroke and the elastic distortion of the myosin head can predict the responses to both kinds of perturbations. The starting point for the calculations was the atomic model for the structure of the myosin head bound to the actin filament5. This was considered to correspond to the configuration in a rigor fibre without any applied strain. The elastic distortion responsible for the 2 nm/T 0 compliance in the cross-bridges was modelled as bending of the light chain, or neck, region of the myosin head, as a uniform cantilever clamped at residue 770 (the beginning of the long α-helix). The working stroke was modelled as a rotation of the neck region about residue 707, in the motor unit6. The length of the lever arm (the distance between residue 707 and the C-terminal of the heavy chain) is then 9.5 nm. The intensity of the M3 reflection was calculated from the 14.5 nm Fourier component of the mass density projection of the myosin heads onto the filament axis. Since shortening of about 1 nm is necessary to maximize the intensity of the M3 reflection15, we assume that at the isometric plateau the neck region is rotated 8° from the perpendicular to the filament axis, or 30° away from its rigor conformation.

Myosin Head Light Chain Region Frog Muscle Single Muscle Fibre Filament Axis
These keywords were added by machine and not by the authors. This process is experimental and the keywords may be updated as the learning algorithm improves.
This is a preview of subscription content, log in to check access.