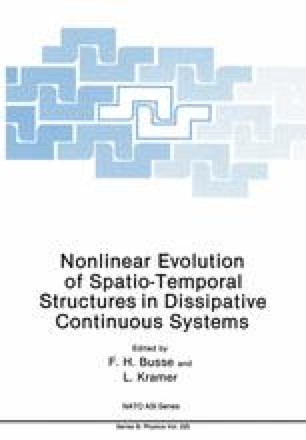 Chaos and the Effect of Noise for the Double Hopf Bifurcation with 2:1 Resonance

A major goal of bifurcation theory is the identification and classification of important degenerate bifurcations of low codimension. Although many have been extensively studied (for a non-exhaustive list see Guckenheimer & Holmes 1983) key exceptions include degenerate Hopf or oscillatory bifurcations with strong resonance. In this paper we consider the problem of 2:1 resonance, so that at the bifurcation point there are considered to be two neutrally stable infinitesimal oscillatory solutions with frequencies in the ratio 2:1. The normal form for this problem was discussed by Knobloch & Proctor (1988) who noted that it contains quadratic as well as the usual non-resonant cubic terms, leading to a system of three coupled real equations, unlike the non-resonant case where the phase equation decouples from the other two. Knobloch & Proctor investigated the normal form including all terms up to cubic order — they found many of the principal transitions, but did not discover any régime in which chaos occurred, and did not identify regions in the unfolding diagram where the dynamics was controlled by the linear and quadratic terms alone. In the present paper we rectify this deficiency by showing that when the linear growth rates γ1,2 of the modes of normalised frequency 1,2 satisfy \( ( - \gamma _1 ) \gg \gamma _2 > 0 \) there are indeed bounded solutions when the normal form is truncated at quadratic order. Furthermore, in this régime the governing o.d.e.’s may be replaced by a one-dimensional map, which can be calculated analytically in certain special cases.

Normal Form Bifurcation Diagram Additive Noise Slow Phase Fast Phase
These keywords were added by machine and not by the authors. This process is experimental and the keywords may be updated as the learning algorithm improves.
This is a preview of subscription content, log in to check access.