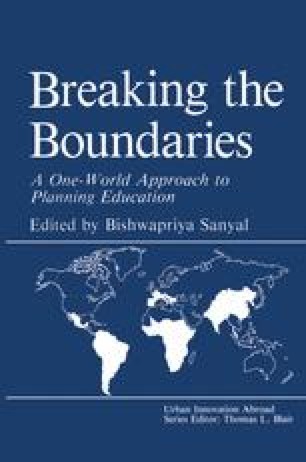 Breaking the Boundaries pp 3-13 | Cite as

Our Approach to Planning Education — and Ourselves

It was December 1985, in Washington, DC, at a cocktail reception sponsored by the World Bank, when Professor Thomas Blair first asked me to edit a volume on planning education. Tom had attended the Association of Collegiate Schools of Planning Conference in Atlanta the month before, where I had presented a brief paper on planning education for international students. He proposed that the edited volume be based on the central theme of my paper, which was on “a one-world approach” to planning education. At first, I was a bit reluctant to accept Tom’s offer, since so much had already been written and said about planning education by such prominent persons as Harvey Perloff, Lloyd Rodwin, John Friedmann, and many others. Tom was persistent, and remarked that he heard a very different voice in my presentation — a voice which, he thought, could be appropriately amplified through the Plenum Series on Urban Innovation Abroad of which he is the Editor. Our conversation that evening had ended rather abruptly as Marian Barry, the mayor of Washington, DC, entered the room and greeted us with a smile and handshakes, turning our conversation to a discussion of his policies about the declining neighborhoods of America’s capital city.

International Student Poor Country Planning Education Mutual Learning Poor Nation
These keywords were added by machine and not by the authors. This process is experimental and the keywords may be updated as the learning algorithm improves.
This is a preview of subscription content, log in to check access.