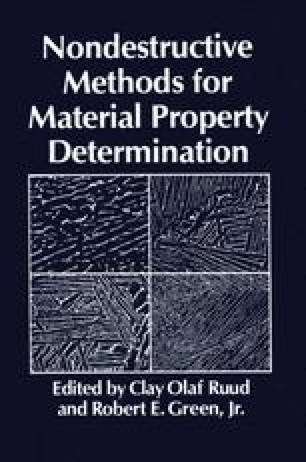 The dependence of acoustic properties on microstructure can complicate the practice of non-destructive evaluation, but it can also suggest new areas of application. This influence of microstructure on acoustic characteristics is particularly important when the wavelength approaches the size of the grains. In this investigation, 100 MHz acoustic waves are used to characterize titanium. Images are obtained on several different alloys (Ti 6Al-4V; Ti 3Al-8V-6Cr-4Mo-4Zr; Ti 5Al-2.5Sn), as well as gas contaminated Ti 6Al-4V welds. To augment the image data, average attenuation measurements and quantitative analysis of the image texture, (e.g. contrast) are obtained. Significant variations in average attenuation were found among the various alloys. The predominantly alpha phase Ti 6Al-4V alloy is found to have uniform acoustic images with average attenuation of 2.0 dB per millimeter. In contrast, the Ti 38644, a beta phase alloy, shows average attenuation of 14.9 dB per millimeter. Variations in acoustic transmission over distances of a few hundred microns ranged from 5 to 28 dB leading to high contrast image texture. Comparison of contaminated and non-contaminated welds in Ti 6Al-4V leads to distinct differences in acoustic propagation at 100 MHz. These variations can be associated with hardness variations measured in the weld, even though gross differentiation on the basis of metallographic analysis is not observed. Contaminated welds were found to exhibit higher attenuation, a more coarse acoustic texture, and higher image contrast, relative to non-contaminated welds.

Insertion Loss Image Texture Beta Phase Alpha Phase Acoustic Image
These keywords were added by machine and not by the authors. This process is experimental and the keywords may be updated as the learning algorithm improves.
This is a preview of subscription content, log in to check access.