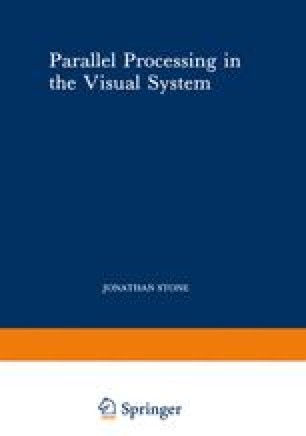 Parallel Processing in the Visual System pp 353-373 | Cite as

On the Understanding of Visual Psychophysics and Behavior

If, as I have argued at such length above, the arrangement of the mammalian visual pathways into parallel-wired systems of neurons is an important feature of their organization, then some evidence of that arrangement should be detectable in the visual performance of mammals; i.e., in their capacity, assessed by psychophysical or behavioral techniques, to respond to visual stimuli. That evidence is the subject of this chapter. The explanation of visual performance is perhaps the most important area of testing for any theory of the neuronal organization of the visual pathways; indeed, the explanation of visual performance in terms of neural mechanisms has long been a fundamental aim of the neurobiologist’s study of vision. Earlier reviews of the correlation between visual performance and the parallel organization of the visual system have been provided by Breitmeyer and Ganz (1976), MacLeod (1978), Stone et al.(1979), and Lennie (1980a).

Spatial Frequency Ganglion Cell Visual Function High Spatial Frequency Striate Cortex
These keywords were added by machine and not by the authors. This process is experimental and the keywords may be updated as the learning algorithm improves.
This is a preview of subscription content, log in to check access.