Immunobiology of Proteins and Peptides—II 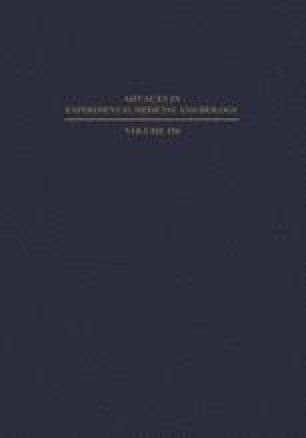 Immunobiology of Proteins and Peptides—II pp 73-93 | Cite as

Previous studies from this laboratory have resulted in the determination of the antigenic structure of sperm-whale myoglobin (Mb). In the present work, we have investigated the fine specificity requirements for T-cell recognition of one of the Mb antigenic sites (antigenic site 5). The antigenic site (peptide 145–153) and seven progressively longer peptides, increasing in length stepwise by two residues at a time up to 22 residues in length (peptide 132–153), were synthesized. In addition, four truncated peptides were synthesized with intentional deletions at Tyr-151 and Ala-144. The T-cell recognition of these purified synthetic peptides was examined here in detail in three strains of mice (BALB/cByJ, Bl0.D2/n and SJL/J). Mb-primed mice afforded T-cells which proliferated to smaller peptides (two or four residues longer than the site; i.e. peptides 145–153 and 143–153) and more so to the longer peptides 135–153 and 132–153 and to Mb. No response was obtained to the truncated peptides, thus underscoring the fine specificity of T-cells. No response was obtained also to intermediate-sized peptides. The latter result, due to an unfavorable mode of folding, suggested a conformational dependency in T-lymphocyte recognition and was confirmed by additional studies employing peptide priming. Thus priming with either the 11- or 22-residue peptides afforded T-cells which proliferated to both of these two peptides, but not to intermediate-sized peptides. More importantly, peptide-primed cells did not proliferate on challenge in vitro with Mb. This indicated that the in vivo recognition (priming) was to the unfolded peptide and these cells will not therefore recognize native Mb in vitro. Tolerization of neonatal mice with native Mb, which was total for the native protein at the T-cell level, had no effect on in vivo recognition (priming) and in vitro proliferation due to the unfolded peptide. Conversely, tolerization by any unfolded peptide had little or no effect on in vivo recognition of, and proliferation to, native Mb. It was concluded that T-cell recognition of native proteins (or at least of Mb) is dependent on protein conformation. A peptide may not cause proliferation of native protein-primed T-cells even though it contains an antigenic site. Finally, macrophage presentation of protein antigens is not related to processing via fragmentation of antigen by macrophage.

Synthetic Peptide Neonatal Mouse Antigenic Site Fine Specificity Reactive Region
These keywords were added by machine and not by the authors. This process is experimental and the keywords may be updated as the learning algorithm improves.