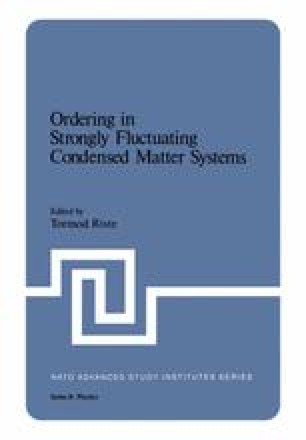 This lecture is intended to pose problems rather than present solutions, so I shall avoid low dimensional systems in which the strong fluctuations are amenable to calculation, as later papers will show in detail. Rather I will concentrate on three dimensional problems which are fluctuating in a different way from the familiar fluctuations of equilibrium in which there is a specified Hamiltonian and all states are accessible. This is not only because they are covered later, but also because it is worth emphasizing that they are rather a rare phenomenon in nature, and the intense effort they attract is because they are the simplest of systems although not of course simple.

Order Transition Spin Glass Classical Statistical Mechanic Turbulent Hydrodynamic Anti Ferro Magnet
These keywords were added by machine and not by the authors. This process is experimental and the keywords may be updated as the learning algorithm improves.
This is a preview of subscription content, log in to check access.