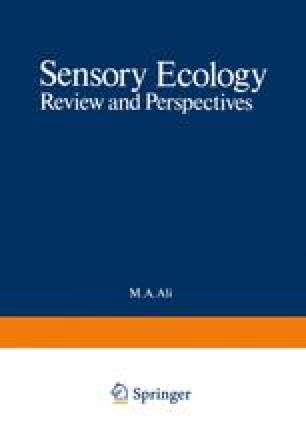 After admiring the beauty of a blank sheet for weeks, nay months, I made an outline of what is to be written and finally, with considerable trepidation, started desecrating the beauty of the sheet’s blankness. Being a simplist by nature, it appeared to me that a general introduction should remain general, especially in a volume of this sort where specifics are being dealt with in the various chapters which follow. To write an historical general introduction, as has been done in quite a few instances which I have admired, would have been well nigh undesirable and indeed impossible due to my own shortcomings, the vastness of the subject and the fact that we like to believe that a new sub-discipline of Ecology is being launched. To cover, in an historical manner all the pioneering studies in Ecology and Sensory Physiology, which could be considered to have indicated the need for the term Sensory Ecology, would have been ideal but voluminous. It would have been incomplete and because of that, not truly useful. With these apologia in mind, I decided to write rather an essay outlining the concepts and reasons I had in mind when the Advanced Study Institute on this subject, a direct result of which this volume is, was planned. This is more easily said then done because it has been, and to a great extent will be, abstract. However, an attempt will be made with a great deal of confidence in the reader’s indulgence.

Sensory Modality Sensory Function Adaptive Radiation General Introduction Sensory Physiology
These keywords were added by machine and not by the authors. This process is experimental and the keywords may be updated as the learning algorithm improves.

Think of the beauty of a blank page before writing!