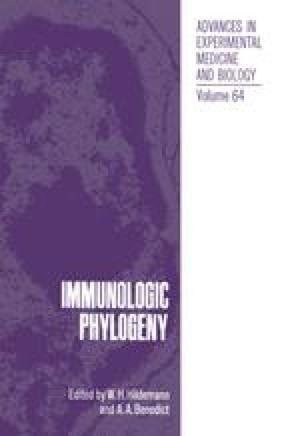 Carrier specific enhancement of an anti-hapten response has been reported for spleen cells of the newt, Triturus viridescens (1). The response was monitored by using immunocytoadherence (ICA). Pooled chicken or toad (Bufo marinus) erythrocytes (CRBC or TRBC) were conjugated with 2, 4, 6 trinitrophenyl (TNP) as previously described. TNP-TRBC were injected intraperitoneally (i.p.) and after 8 days sensitized spleen cells from 4 adult newts were mechanically dissociated, pooled, washed, counted and incubated 12–16 hours at 4°C with either horse erythrocytes (HRBC) or TNP-HRBC. Spleen cells previously sensitized to test immunogens will bind them on their surface. After the incubation, the numbers of antigen binding cells (ABC) in each incubation mixture were counted in hemacytometer chambers. In the absence of carrier immunization or with immunization by injection of an erythrocyte species other than the one used as carrier, a consistently small proportion of the spleen cells bound either antigen. This low degree of binding, which exceeded that found when no prior immunization was effected, served as a measure of cross reactivity between the two erythrocyte species used. However, when the newt spleen cells had been sensitized with the carrier species of erythrocytes within 4 days prior to hapten presentation, a substantial enhancement in the number of cells binding TNP-HRBC over those binding HRBC was observed. The number of cells binding due to cross reactivity between the carrier and HRBC, which was itself enhanced by immunization, can be subtracted from the average number of TNP-HRBC ABC in order to arrive at the number of TNP specific ABC. That these were indeed TNP specific was shown by pre-incubating the sensitized spleen cells with TNP-human serum albumin (HSA) prior to performing the binding assay. Only TNP-HRBC ABC were blocked, those remaining reflecting the degree of cross reactivity with HRBC. Because similar results obtained with other animals (e.g. the rodent) were shown to reflect cell cooperation between carrier specific “helper” and antibody producing cell (APC) subpopulations (2, 3, 4), it was suggested the cell cooperation was also required for hapten responses in the newt. This assumption was strengthened by further studies (5) which showed that, as in the rodent (6), low immunogen doses (0.0025% RBC) enhance “helper” activity, even when they do not stimulate antibody synthesis. It was found that low and high immunogen dose-initiated antigen binding responses exhibit very different kinetics. Low dosages stimulate maximum ABC activity by 2 days, while high doses generated a much higher number of ABC, but this activity did not reach a maximum until 8 days post-primary challenge. While we cannot yet be certain, this difference is at least consistent with the hypothesis that two populations of spleen cells can be visualized by ICA and that they are involved in antihapten responses in the newt.

Spleen Cell Antigen Binding Antibody Produce Cell Adult Newt Prior Immunization
These keywords were added by machine and not by the authors. This process is experimental and the keywords may be updated as the learning algorithm improves.

This research was partially supported by grants from the National Science Foundation (GB-38480), the National Institutes of Health (Al-611-75), Washington, D.C. and from the Zlinkoff Fund for Medical Research and Education Inc., N.Y.C., N.Y.