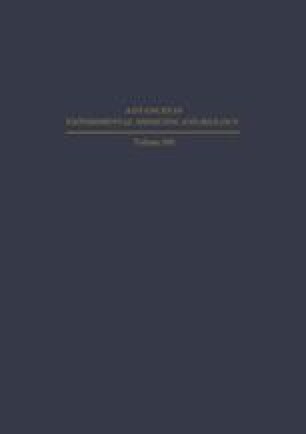 Myelination and Demyelination pp 347-363 | Cite as

Lymphocytes from lymph nodes of Lewis rats with acute experimental allergic encephalomyelitis (EAE) contain high amounts of acid and neutral proteinases which hydrolyze myelin basic protein. The activity at neutral pH is also expressed by whole lymphocytes in isotonic medium, with about 50% more activity released by homogenization. Neutral proteinase activity in lymphocytes increases with the onset of acute EAE while the activity of those from Freund’s adjuvant-injected controls increases somewhat later. The total neutral proteinase activity appears to be membrane-bound, most likely in the lysosomes, but half the total was associated with the nuclear fraction.

The basic protein proteinase was compared with an enzyme described earlier, especially active toward polylysine, and some differences were noted. It appears that two enzymes may be present in lymphocytes which hydrolyze basic protein at a neutral pH.

An increase in neutral proteinase activity was observed in some, but not all, lymphocyte preparations from patients in various stages of multiple sclerosis.

The finding that whole activated lymphocytes are capable of hydrolyzing basic protein suggests that these cells which are believed to be precursors of mononuclear cells migrating into the central nervous system may be active agents in the early stages of myelin dissolution in experimental allergic encephalomyelitis. At present, such a mechanism is only theoretical, and the possibility that activated lymphocytes may be a factor in demyelination in multiple sclerosis is even more speculative.

Proteolytic Activity Myelin Basic Protein Basic Protein Myelin Sheath Acid Proteinase
These keywords were added by machine and not by the authors. This process is experimental and the keywords may be updated as the learning algorithm improves.
This is a preview of subscription content, log in to check access.