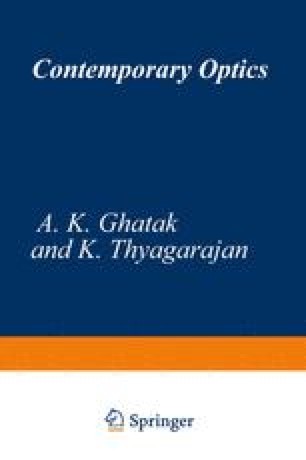 One of the most important developments in optics has been the realization that image formation by optical systems can be treated as a linear process and hence the general theory of linear systems (which are extensively used in electrical circuits) can be applied to optical systems. Consequently, as in electrical circuits, one can study the imaging quality of an optical system by applying frequency response techniques; this leads to the concept of transfer functions, which can be calculated from the design data of the optical system. In this chapter, we have developed the theory behind the optical transfer function (OTF). It may be mentioned that when an optical system has small aberrations, the geometrical optics analysis of the image is not even qualitatively correct and one must incorporate the effects of diffraction. The diffraction effects are implicitly contained in the optical transfer function. Consequently this gives the lens designer a method for accurately designing an optical system.

Optical System Spherical Aberration Coherent System Wavefront Aberration Optical Transfer Function
These keywords were added by machine and not by the authors. This process is experimental and the keywords may be updated as the learning algorithm improves.
This is a preview of subscription content, log in to check access.