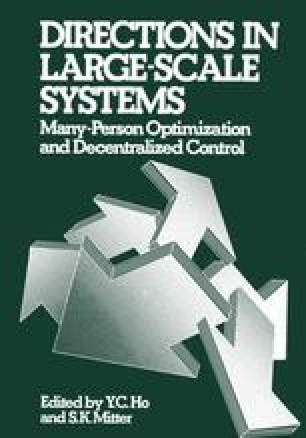 Modelling & Control of the U.K. Economy

A small model of the U.K. Economy has been estimated from official statistical records utilising extreme parsimony in the equations and hence considerable aggregation of variables. The size of the model is determined by the need to say something about the four major policy problems facing the U.K., namely, unemployment, price stability, economic growth and balance of payments equilibrium. It has 16 behavioural equations and 11 identities, and is conveniently divided into 3 main sectors of Expenditure, Distribution and Trade. Simultaneous estimation procedures are employed for determining the parameters and disturbances within each sector.

A number of control variables have been included in the model and the equations have been transformed into state-variable form in order to utilise the techniques and results of optimal control theory in its linear quadratic Gaussian form. The weights attached to the terms of the quadratic performance index condition the character of the performance obtained and their choice therefore remains a matter of political considerations. While the economy is certainly not linear it is possible that the resulting linear controller, using as it does the feedback principle, would give a very tolerable approximation to the desired performance in controlling the real economy.

An experiment is described by means of which it is hoped to demonstrate this by utilising the large-scale forecasting model of the London Business School as a simulation of the true economy. The paper describes the design considerations that arise in applying the linear controller from the small model for purposes of controlling the larger one.

Taxable Income Personal Income Optimal Control Theory Linear Controller Behavioural Equation
These keywords were added by machine and not by the authors. This process is experimental and the keywords may be updated as the learning algorithm improves.