Volcanism and the Upper Mantle 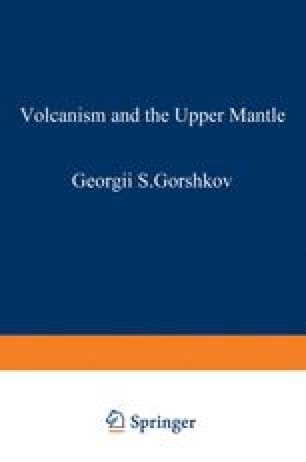 Volcanoes of the Kurile Islands

Chapter
Part of the Monographs in Geoscience book series

Our main task was the study of the volcanoes of the Kurile arc, and to their description we have devoted most of our attention. In all, 160 Quaternary terrestrial volcanoes and volcanic groups are described in the present work, i.e., twice as many as in our earlier summaries. Of these, 104 volcanic edifices have been active in the Holocene. In one of the earlier summaries (Gorshkov, 1958) we estimated this number at 51–52; thus, the results of our later investigations have allowed us to double this number. If we compare the number of now known volcanoes with that known prior to 1946 (cf., for example, Zavaritskii, 1946), the result of our work on the study of volcanism in the Kurile arc seems rather impressive; more than 100 new volcanoes, among them some active ones, have been discovered and described. In addition, dozens of other volcanoes have been described that earlier were known only by name. Perhaps mentioning our “services” is not very modest, but looking back at the road travelled, I cannot help but feel some satisfaction.

Lava Flow KURILE Island Pyroclastic Flow Scoria Cone Summit Crater
These keywords were added by machine and not by the authors. This process is experimental and the keywords may be updated as the learning algorithm improves.
This is a preview of subscription content, log in to check access.

Cite this chapter as:
Gorshkov G.S. (1970) Volcanoes of the Kurile Islands. In: Volcanism and the Upper Mantle. Monographs in Geoscience. Springer, Boston, MA