Instrumental Analysis in the Biological Sciences 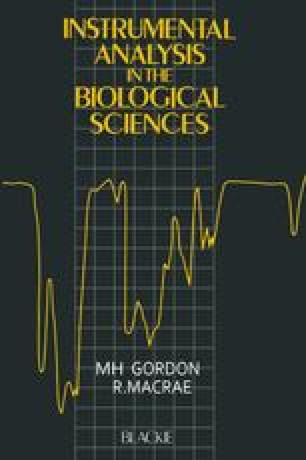 Instrumental Analysis in the Biological Sciences pp 175-193 | Cite as

There are three related techniques, often collectively known as flame techniques, based on the ability of flames to produce free atoms and other atomic species from inorganic analytes in solution. The simplest of these is flame photometry, now more commonly termed flame emission spectrometry (FES), which is based on the measurement of the light emitted when atoms raised to an excited state by the thermal energy of the flame return to the ground state. In practice, the proportion of the atoms raised to an excited state is very small, so that most of the free atoms remain in the ground state. These atoms are thus able to absorb radiation, provided its frequency, and hence energy, corresponds to the difference in energy between the ground and excited states. This process of absorption is the basis of atomic absorption spectrometry (AAS). The absorbed energy will be subsequently re-emitted as the atoms return to the ground state. This re-emission will be in all directions and hence a net absorption of the radiation will occur along the axis of the incident beam. This re-emission also provides the basis for the third flame technique, that of atomic fluorescence spectrometry (AFS), in which the fluorescence is measured at an angle, often 90°, to the incident radiation. This is a relatively specialized technique, but the other two techniques are very widely used in the analysis of biological materials. The essential differences between these three techniques can be summarized diagrammatically (Figure 11.1). It should be noted that in FES, no external radiation source is involved. The nature of the events taking place as the analyte solution enters the flame are of crucial importance to all of these techniques. The conversion of the analyte in solution to a form capable of determination by FES or AAS is a multi-stage process as shown in Figure 11.2. The proportion of species converted at each stage will influence the final yield of the required atomic state in the flame.

Excited Atom Free Atom Hollow Cathode Lamp Atomic Fluorescence Spectrometry Nitrous Oxide Oxygen
These keywords were added by machine and not by the authors. This process is experimental and the keywords may be updated as the learning algorithm improves.
This is a preview of subscription content, log in to check access.