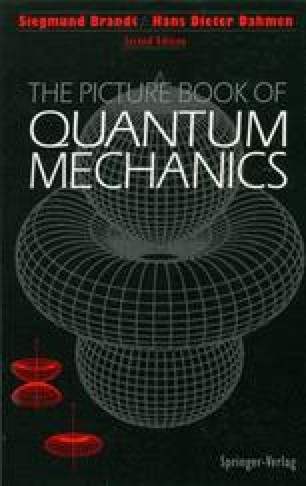 So far we have always studied the motion of a single particle under the influence of an external potential. This potential is, however, often caused by another particle. The hydrogen atom, for example, consists of a nucleus, the proton, carrying a positive electric charge, and a negatively charged electron. The electric force between proton and electron is described by the Coulomb potential. The proton exerts a force on the electron, and — according to Newton’s third law — the electron exerts a force on the proton. The proton has a mass about 2000 times the electron mass. Therefore the motion of the proton relative to the center of mass of the atom can usually be ignored. In this approximation the electron can be regarded as moving under the influence of an external potential. Generally, however, we have to describe the motion of both particles in a two-particle system. For simplicity we shall consider one-dimensional motion only; that is, both particles move only in the x direction.

Harmonic Oscillator Marginal Distribution External Potential Couple Oscillator Initial Momentum
These keywords were added by machine and not by the authors. This process is experimental and the keywords may be updated as the learning algorithm improves.
This is a preview of subscription content, log in to check access.