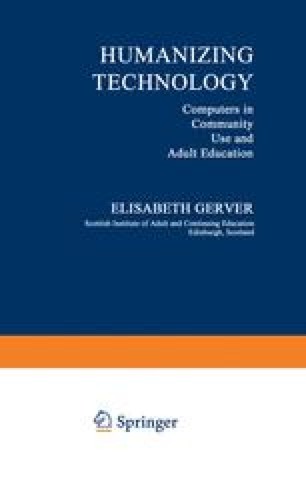 Much of this book has focused on the Janus-face of computers and has emphasized the contrast between their promises and their practical realities. As Chapter 1 suggested, the possibilities offered by computer power for increasing the choices available to people and communities are overshadowed by the economically and socially divisive effects of computers where they are introduced into a competitive world. Chapter 2 then considered both the current antifemale bias of the world of computing, and the fact that, in certain respects, women may be more effective than men in exploiting a computer as the powerful slave it is. Chapter 3 discussed the educational opportunities that can be opened up by learning both by and about computers, but it also recognized the bizarre extent to which the realities of computer courses and computer learning programs often fail to meet the needs of learners.

Open Learning Community Educator Cooperative Model Educational Computing Competitive World
These keywords were added by machine and not by the authors. This process is experimental and the keywords may be updated as the learning algorithm improves.

“There are no simple technological fixes for complex social problems” Norman, 1981.