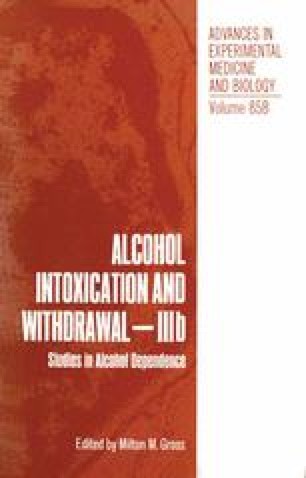 The magnitude of the ethanol withdrawal reaction was assessed in rhesus monkeys (Macaca mulatta) following 96 hours of either constant or systematically fluctuating blood ethanol concentrations (BEC) using both physiological tremor and scores on a behavioral checklist as dependent measures. Although specific BEC (50, 100, 200 or 300 mg/dl) were not reliably related to changes in mean frequency of tremor, this measure was a statistically significant curvilinear function of time as measured before and after zero BEC during the withdrawal period. Further, scores from the behavioral checklist demonstrated a dose-response relationship with respect to BEC. The data also suggest that systematically fluctuating BEC are associated with less severe withdrawal reactions when compared with appropriate data from the constant BEC condition.

In a recent review of techniques used to induce physical dependence upon alcohol in nonhuman primates (Pieper, 1975), the problem of quantification of the alcohol withdrawal reaction was emphasized as a problem yet to be solved by those researchers using nonhuman primates. In particular, if one or more physiological responses could be identified that would reliably, accurately and objectively measure the severity of the withdrawal reaction, important questions relating to dose-dependent and time-dependent relationships between ethanol intake and the development of physical dependence might be answered. This type of problem is especially critical when working with relatively low degrees of ethanol exposure over short periods of time, conditions which more closely parallel prevalent drinking patterns in humans. Under such conditions, only relatively mild symptoms would be expected to emerge during withdrawal and, thus, are even more difficult to objectively describe and measure using such techniques as self-rating scales and behavioral checklists. Without evidence to the contrary, it seems reasonable to assume that the biological process underlying physical dependence and the subsequent withdrawal process form a continuum of symptoms which may exist at the low end as a severe hangover to what is easily recognized in the extreme instance as a severe withdrawal reaction, including convulsive and hallucinatory behavior. Although several investigators have successfully described these more extreme aspects of alcohol withdrawal (Ellis and Pick, 1970; Pieper et al., 1972), little data have been reported relating to the effects of moderate intake on central nervous system excitability in nonhuman primates. The parametric work of Goldstein with mice (1974) detailing the development and decay of ethanol induced physical dependence is suggestive of the kinds of questions and answers which could be addressed with nonhuman as well as human primate forms if suitable measurement techniques could be developed for use with these species. The primary focus of this research report is to describe the use of physiological tremor measurements in conjunction with a behavioral checklist to quantify the withdrawal reaction in rhesus monkeys following systematically varied, ethanol doses.

Rhesus Monkey Nonhuman Primate Essential Tremor Physical Dependence Withdrawal Period
These keywords were added by machine and not by the authors. This process is experimental and the keywords may be updated as the learning algorithm improves.