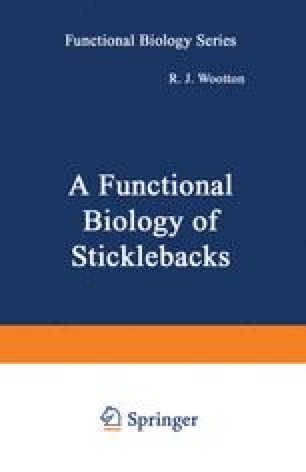 A Functional Biology of Sticklebacks pp 193-226 | Cite as

If samples are taken from a population of G. aculeatus and carefully examined, the individual fish will differ in a number of easily measured characters such as the number of bony lateral plates. In some populations of G. aculeatus, three distinct patterns of arrangement of lateral plates are found, so fish belong to either the low, partially or completely plated morph (Figure 3.2) (Chapter 3). Even in populations in which only a single morph is found, individual fish vary in their number of plates. Other phenotypic characters, which vary both within and between populations, include the numbers of gill rakers, dorsal and anal fin rays and spines, and the extent of the development of spines and associated skeletal elements. One explanation for such variation within and between populations of the same species is that it is a result of the environmental conditions prevailing during the ontogeny of the individuals rather than any underlying genetic differences between individuals. If such phenotypic variations do reflect an underlying genetic variation, then a major problem is posed: what is the biological significance of the variation which is expressed phenotypically, but is generated by genetic variation in and between populations of the same species? Natural selection should result in the evolution of populations made up of individuals which, under the prevailing environmental circumstances, are most successful at leaving progeny. It might be expected that all individuals in a population would be uniform in their characteristics because those were the characteristics that resulted in reproductive success. Yet stickleback populations do not consist of numbers of virtually identical fish. On the contrary, G. aculeatus in particular is an extremely variable species. This situation is not unique to sticklebacks. Studies over the past two decades on protein variation in many species of plants and animals have confirmed that, far from being genetically uniform, natural populations contain high levels of genetic variation (Lewontin, 1974). Sticklebacks are a particularly favourable group for the study of the significance of this genetic variation, because they exhibit easily recognisable variation, are readily studied in both field and laboratory conditions and have a sufficiently short life history to make genetic analysis practicable.

Selective Factor Plate Number Lateral Plate Spine Length Typical Male
These keywords were added by machine and not by the authors. This process is experimental and the keywords may be updated as the learning algorithm improves.
This is a preview of subscription content, log in to check access.