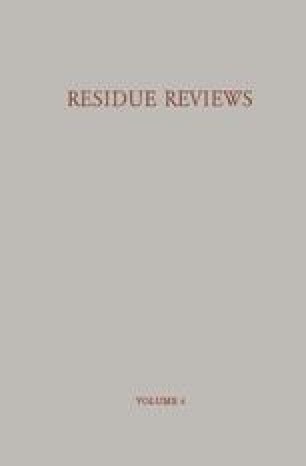 Effects of “Use of Pesticides” from an industrial viewpoint

From an industrial viewpoint, the preceding report of the President’s Science Advisory Committee, under the chairmanship of Jerome B. Wiesner and thus the Wiesner Report might be considered as simply one more major event in the technological revolution which has engulfed all phases of the pesticide industry following the introduction of DDT. The portentous developments following the wide scale usage of DDT have been many. Most observers recognize these changes as a steady tightening of regulatory control, a steady increase in the cost of developing new compounds, and an adaptation of chemical pesticides to the growing needs of agriculture which, in itself, is going through a broad technological revolution.

Pesticidal Chemical Preceding Report Portentous Development Dollar Cost Restricted License
These keywords were added by machine and not by the authors. This process is experimental and the keywords may be updated as the learning algorithm improves.
This is a preview of subscription content, log in to check access.