Applied Stochastic Models and Control for Finance and Insurance 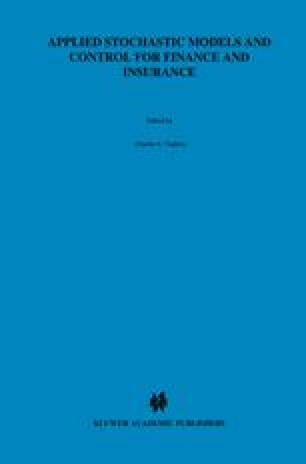 Markov processes have a one period memory since the transition probabilities depend on the last state the process may be in. In reality, memory processes may be much more complex. It is therefore important to construct stochastic processes which can represent more precisely the effects of past states on future transitions, i.e. construct memory processes. Exponential smoothing, auto-regressive, ARMA (Auto-Regressive Moving Average) models are instances that approximate “ the behavior ” and the “ effects ” of memory while maintaining the basic and convenient structure of Markov processes. In this chapter, we consider in addition to ARMA and related models, ARCH and GARCH models as well as the modeling of volatility which are essentially nonlinear stochastic models which we can estimate using available statistical techniques. In economics, interest in such models arose after the publication of a paper by Charles Nelson and Charles Plosser 1982 on “ Trends and Random Walks in Macroeconomic Time Series ”. Based on the study of a very large number of time series, they were not able to confirm that the “ noise ” is normal (which is often stated as the unit root hypothesis). This mean either that economic processes have inherent non-stationarities not explainable by models such as ARIMA or related models or that there is a long range memory effect to economic time series which is not accounted for by simple Markov models. Of course, this has stimulated much more thinking about the behavior of time series, business cycles, memory and their modeling. Consider speculation in the stock market as an example. It may be that the expectation of a future price rise may prompt us to some current action which is neither the reflection of the past or the present. Of course, the past is an important influence on our expectations of a future price, but past prices have little weight compared with our “ intrapolation ” of the future—i.e., the mechanism by which a set of future uncertain events is related to the present. Such anticipative processes can be quantified only speculatively and therefore stochastic processes are particularly useful (since they represent many and probabilistic realizations of the future). For example, consider again the Ornstein-Uhlenbeck process with an initial condition x(0) = 0

Interest Rate Brownian Motion Random Walk Stock Market Wiener Process
These keywords were added by machine and not by the authors. This process is experimental and the keywords may be updated as the learning algorithm improves.
This is a preview of subscription content, log in to check access.