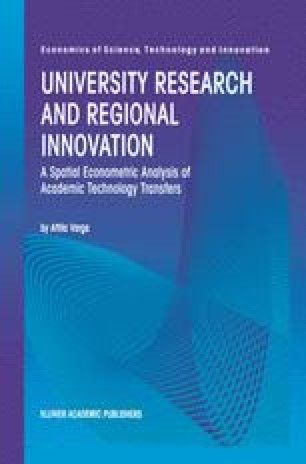 In 1938, Stanford University professor Fred Terman encouraged his student, Bill Hewlett, to start a company based on an idea in Hewlett’s master’s thesis project. As a consequence, Hewlett-Packard (H-P), now a Fortune 500 company, has become probably the first university spin-off firm in history. By demonstrating the advantages of being close to a university, H-P was the nucleus for Silicon Valley [Rogers and Larsen (1984)]. Route 128, the other major US high technology concentration in the Boston area, has been supported largely by an active local economic involvement of the Massachusetts Institute of Technology (MIT). By the 1960s, 175 firms were identified as being founded by MIT personnel [Dorfman (1983), Wicksteed (1985))]. Between 1988 and 1993, forty biotechnology companies were spun-off from MIT research laboratories [Parker and Zilberman (1993)]. Cambridge University in the United Kingdom has indirectly been the origin of virtually all the 355 high technology companies in the Cambridge area [Wicksteed (1985)].

Spatial Data Analysis Exploratory Spatial Data Analysis Knowledge Production Function Local Economic Growth High Technology Company
These keywords were added by machine and not by the authors. This process is experimental and the keywords may be updated as the learning algorithm improves.
This is a preview of subscription content, log in to check access.