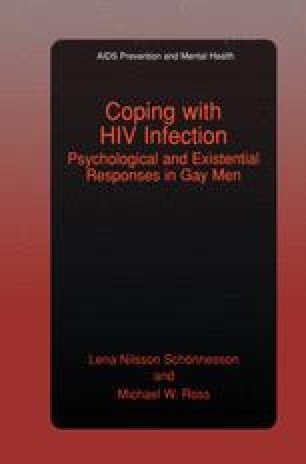 At the beginning of this book, we described its focus in terms of illuminating the drama of the HIV scenario and the psychological landscapes in which it is embedded among gay men with HIV. We believe that through the longitudinal, long-term study of the 38 gay men with HIV, we have been able to demonstrate that the psychosocial, sexual, and existential issues that emerged were more salient at different levels of the disease process. This would not have been possible by applying a cross-sectional approach, which is characteristic of most of the previous national and international studies. We also think that the study has illuminated many of the responses to, and impacts of, chronic and terminal illnesses discussed in Chapter 2. There is no doubt that the responses to and the adaptation processes of HIV disease scenario as well as the self scenario are a complex and multifaceted web. We also believe that with the exception of access to health care, an issue that sets the United States apart from all other civilized democracies, the psychological issues that arise in the Swedish sample can be shown to be almost identical to those that have been discussed in the literature from the United States.

Terminal Phase Psychological Issue Death Anxiety Disease Phase Existential Issue
These keywords were added by machine and not by the authors. This process is experimental and the keywords may be updated as the learning algorithm improves.
This is a preview of subscription content, log in to check access.