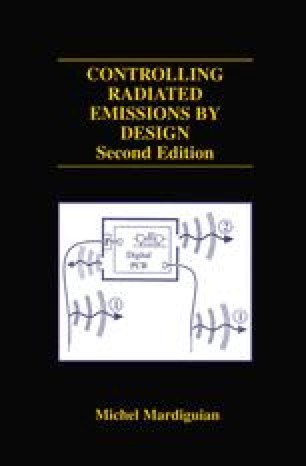 Compliance with radiated emission limits of FCC or EEC regulations, or the stiffer levels of MIL-STD-461 or TEMPEST, has always been a nightmare for the EMI engineer or, more generally the electronic engineer. Too many times, using a blend of rules-of-thumb, tradition and his company’s homegrown recipes, the designer does his best to have a prototype working unplagued by internal noise problems, then brings it to an EMI test site to “see if it passes”. In many cases it does not, and several redesign and retest iterations are necessary to reduce sufficiently the radiated spectrum. These test iterations are generally costly, even if they are covered in the general “hidden costs” that appear in preliminary early financial projections. The method described in this chapter allows the designer to identify and reduce out-of- spec radiations without necessarily having to return to an RFI test site for each trial fix.

Power Cable Photo Courtesy Specification Violation Power Cord External Cable
These keywords were added by machine and not by the authors. This process is experimental and the keywords may be updated as the learning algorithm improves.
This is a preview of subscription content, log in to check access.