Elastic Filaments of the Cell 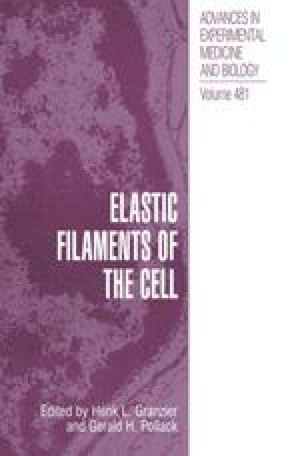 Rat cardiac trabeculae constitute a well-known experimental model in studies of cardiac contraction at the sarcomere level. Continuous measurement of length of the sarcomeres (SL) by laser diffraction technique permits one to monitor the active shortening of the contractile units during generation of force. When the preparation is stimulated repetitively (0.5 Hz) by electrical pulses, active shortenings are separated by periods corresponding approximately to the diastolic interval in the heart and wherein normally no major contractile event would have been expected. In contrast to this expectation, studies conducted with high-resolution (2–4 nm) SL measurements technique revealed that sarcomeres continuously lengthened (by 10–60 nm) from the end of twitch relaxation to the next stimulation. Such lengthening resulted from an internal expansion of the sarcomere and not from stretch exerted by extra-sarcomeric sources. We further characterized diastolic changes by measuring sarcomere stiffness (Sarc-Stifl) estimated from the response to short bursts (30 ms) of sinusoidal perturbations (frequency: 500 Hz) at 5 moments of the resting interval separating twitches. Sarc-Stiff increased continuously by ~ 30 % during the diastolic interval (29°C, pH: 7.4, [Ca2+]o = 1 mM). We then investigated during the same period the intracellular dynamics of Ca2+, as a major determinant of sarcomere motions in muscle. Intracellular free-Ca2+ concentration ([Ca2+]j) was measured continuously in trabeculae microinjected with the fluorescent Ca2+-probe Fura-2 and stimulated at 0.5 Hz. It appeared that the Ca2+-transient, which drives the twitch, did not end with the apparent relaxation of the force. Instead, [Ca2+]. kept decreasing in an exponential manner throughout the diastolic interval. At [Ca2+]o = 1 mM, [Ca2+]. decreased from 230 to 90 nM with a time constant of ~250 ms. The similarity in time courses of Ca2+-decline and of Sarc-Stiff increase suggested that properties of resting sarcomeres were related to [Ca2+]. in the sub-micromolar range. In order to examine this possibility, Sarc-Stiff was measured in chemically skinned trabeculae, i.e. in a preparation allowing control of [Ca2+] surrounding the sarcomeres. Sarc-Stiff was measured at different [Ca2+] from 1 to 450 nM. We found that 1) below 70 nM, Sarc-Stiff was independent on [Ca2+], 2) between 70 and 200 nM, i.e., approximately the range wherein [Ca2+]i decreased during diastole in intact muscle, Sarc-Stiff decreased by ~ 50 % with increase of [Ca2+] and 3) above 200 nM, Sarc-Stiff increased steeply with increase of [Ca2+] as was expected from Ca2+-dependent attachment of cross-bridges between actin and myosin. The data fitted accurately to the sum of 2 sigmoid functions: 1) at [Ca2+] < 200 nM, Sarc-Stiff decreased with increase of [Ca2+] with a Hill coefficient (nH) = -2.6 and [Ca2+] at half maximal activation (EC50) = 0.16 ± 0.013 μM 2) at [Ca2+] > 200 nM, Sarc-Stiff increased with [Ca2+] (nH 2.1; EC50: 3.4 ± 0.3 μM) consistent with Ca2+-dependent attachment of cross-bridges. It was possible to reproduce the diastolic variation of Sarc-Stiff observed in intact muscle by using the time course of [Ca2+]i in the Sarc-Stiff — [Ca2+] relationship determined from skinned trabeculae.

We conclude that physical properties of the sarcomeres are inversely related to Ca2+ below 200 nM, i.e., in a range of concentrations where the myocytes operate during diastole while the influence of cross-bridges is negligible.

Sarcomere Length Intact Muscle Stiffness Modulus Diastolic Interval Cardiac Sarcomere
These keywords were added by machine and not by the authors. This process is experimental and the keywords may be updated as the learning algorithm improves.
This is a preview of subscription content, log in to check access.