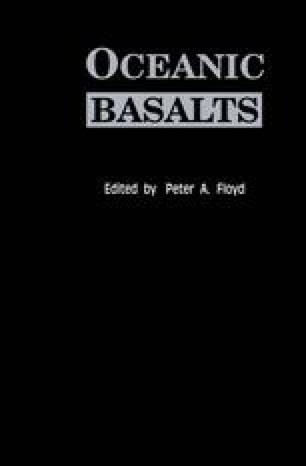 Mineralogy and crystallization of oceanic basalts

Basalt was once termed the `universal earth magma’ (Daly, 1903). Basalt erupted at spreading ridges comes closest to being a universal igneous substance on our planet, covering nearly two-thirds of the earth’s surface beneath the oceans. Three decades ago, the lavas of the oceanic ridges were virtually unknown and unsampled. Today, major portions of the ocean ridge system in the Atlantic, Pacific and Indian Oceans have been dredged, drilled and sampled by submersible. An early impression of almost monolithic uniformity of composition (e.g. Engel and Engel, 1963; Muir and Tilley, 1964; Engel et al., 1965; Aumento, 1967; Miyashiro et al., 1969; Kay et al., 1970) gave way successively to understanding that: (1) source regions are geochemically and isotopically distinct (e.g. Corliss, 1970; Schilling, 1973; Hart and Schilling, 1973); (2) the degree of differentiation varies from place to place (e.g. Bass, 1971; Scheidegger, 1973; Clague and Bunch, 1976; Christie and Sinton, 1981); and (3) there is a range in the bulk compositions of parental magmas (e.g. O’Hara, 1968a; Stolper, 1980) which shows a systematic relationship to axial depths, geoidal signature and crustal thickness (Bryan and Dick, 1982; Dick et al., 1984; Klein and Langmuir, 1987; McKenzie and Bickle, 1988).

Oceanic Crust Oxygen Fugacity Chromian Spinel Spreading Ridge Oceanic Basalt
These keywords were added by machine and not by the authors. This process is experimental and the keywords may be updated as the learning algorithm improves.
This is a preview of subscription content, log in to check access.