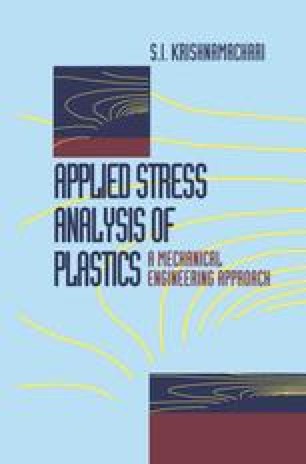 One of the evolutionary changes in the plastics industry is the shift from the concept of “design-by-rules” to one of “design-by-analysis.” Design-by-rules is the method of design based on prior experience, rather than by structural mechanics. In design-by-analysis, stress analysis plays a central role [1]. It is not a new concept in mechanical engineering, since such a concept arose in railroad engineering, and then was adopted in automotive, and aircraft industries, and later in the nuclear power industry with higher levels of sophistication. In its simplest form, the concept emphasizes the thorough understanding of the in-service behavior of a product well before its manufacture. Simply, the design-and-analysis technique is the most economical way to simulate the working of the product, before its blueprints are made. The concept of design-by-analysis is already in vogue in mature industries. With the increasing use of plastics for structural functions, the relevance of design-by-analysis is evident. Thanks to powerful personal computers, the engineer is able to perform several tasks of design-by-analysis at a reasonable cost. Typically, the geometry of a part is created with CAD software and is data-based in a format that can be ported to many different software modules. For example, it can be used as input for a mold flow analysis, a mold design program, a material estimation program, a drafting program, or a finite element analysis program. Until the late 1980s, such facilities were out of the reach of any but the very largest industries.

Stress Analysis Creep Strain Stress Concentration Factor Tangent Modulus Primary Stress
These keywords were added by machine and not by the authors. This process is experimental and the keywords may be updated as the learning algorithm improves.
This is a preview of subscription content, log in to check access.