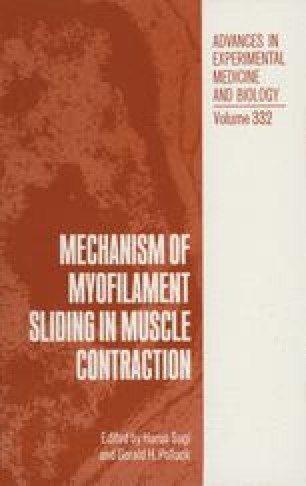 To give information about changes in orientation of myosin heads (cross-bridges) during contraction, mechanically skinned frog muscle fibers were rapidly frozen in various states, and cross-bridge angles were measured on the freeze-etch replicas. Histograms of cross-bridge angle distribution showed a peak around 90° in relaxed, contracting and rigor states. The proportion of cross-bridges taking angles around 90° decreased when rigor fibers were stretched or released before freezing. These results are explained by assuming the stretch-induced tilting of cross-bridges due to elastic recoil of the thin filaments in the I-band.

As a matter of fact, the axial spacing of actin monomers in the thin filament increased with increasing rigor force before freezing. The stiffness times unit length of the thin filament was estimated to be about 1.8 × 104 pN.

Actin Filament Thin Filament Myosin Head Thick Filament Actin Monomer
These keywords were added by machine and not by the authors. This process is experimental and the keywords may be updated as the learning algorithm improves.
This is a preview of subscription content, log in to check access.