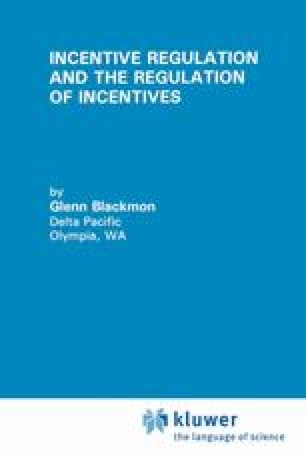 Incentive Regulation and the Half Loaf

Traditional, cost-of-service regulation is the economic equivalent of a simple expense-sharing regime, as the previous chapter demonstrated. The firm’s rates are adjusted to reflect its expenditures, but the reimbursement is partial. The firm bears some fractionoc α≤1 of its expenditures. Under cost-of-service regulation the firm’s share is not set by explicit policy; instead it is the product of regulatory lag. In this chapter, I will look at recent efforts of regulators to use expense sharing more deliberately and as an explicit tool. This alternative regulatory mechanism, generally calledincentive regulationhas so far been limited to telecommunications companies, but there is no particular reason why, if it is worthwhile, it could not be applied in other regulated industries. Several states have adopted incentive regulation mechanisms for telephone companies, and while their plans differ in details, they all rely on a single, simple truth:Better is half a loaf than no bread.66

Incentive Mechanism Supply Curve Incentive Regulation Incentive Payment Deadweight Loss
These keywords were added by machine and not by the authors. This process is experimental and the keywords may be updated as the learning algorithm improves.
This is a preview of subscription content, log in to check access.