The Management of Quality and its Control 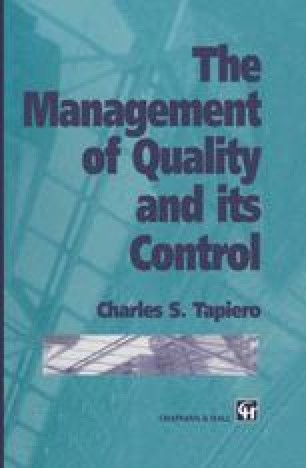 The tools of quality control and its management

At the beginning of the century, when production was an art and quality a measure of this art, the tools of quality were those used by the artist, unique and irreproducible. When production became more systematic and organized, rationalization of work, division of labour, standardization and ‘deresponsabilization’ of workmanship induced the use of supervision and controls of various sorts. These were needed for two reasons: first, to ensure that parts production was meeting the production standards so that each part could be used as a substitute in a mass production system; and second, to ensure that intended production was also performed according to agreed upon standards. At the beginning of the century, ‘sabotage’ (when workers would put their sabots wooden shoes into machines to stop or destroy the process operation) was becoming troublesome. Supervision of people and processes were needed. Today, the problems are different and the tools needed have also changed. Quality is a far broader concept, more complex and more difficult to manage and the tools more varied. Quality is, as we have seen earlier, viewed in a broader setting, affected and affecting a large number of factors and variables, which require the handling and control of a massive inflow of information and complex control systems.The management of quality (though still an art) is becoming increasingly dependent on data and statistical analyses.

Hazard Rate Negative Binomial Distribution Reliability Function Prob Ability Pareto Chart
These keywords were added by machine and not by the authors. This process is experimental and the keywords may be updated as the learning algorithm improves.
This is a preview of subscription content, log in to check access.